I think these time period stories are so stupid as a full length and shows lack of imagination. next idea tale of two cities with Yetis, who are members of nambla. Its so dumb. I’m glad their sewing this guy. there are a million of writers worker their fingers to the bone with original content and this dick head fucktard, rewrites the phone book and read by mark twain and its an instant hit. Shame on you!!

Pride and Prejudice and Zombies author Seth Grahame-Smith is being sued by his publisher for delivering a manuscript that Hachette claims is “an appropriation of a 120-year-old public-domain work”.

Grahame-Smith, who unleashed the zombie mashup on the world with the surprise 2009 hit Pride and Prejudice and Zombies, and went on to write the bestseller Abraham Lincoln: Vampire Hunter, is being taken to court by Hachette for breach of contract. The complaint, which was posted online by Publishers Marketplace, says that the author and publisher made a $4m (£3m) deal in 2010 for Grahame-Smith to deliver two new works, with an initial instalment of $1m paid to the author.

Grahame-Smith delivered the first book, The Last American Vampire, a sequel to Abraham Lincoln: Vampire Hunter that was published in January 2015. But according to Hachette, the deadline for delivery of the second was extended from June 2013 to April 2016. 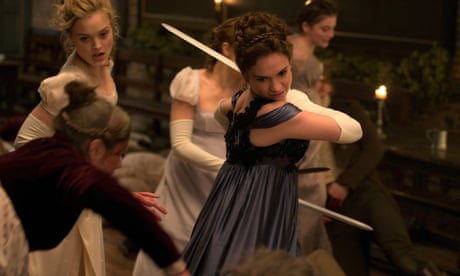 Literary mash-ups: why stop at Pride and Prejudice and Zombies?

The complaint says the Grahame-Smith delivered the second manuscript in June 2016, but alleges that the work was “not original to Smith, but instead is in large part an appropriation of a 120-year-old public-domain work”, that it “materially varies from the 80,000-100,000 word limit” agreed on, and that it “is not comparable in style and quality to Smith’s wholly original bestseller Abraham Lincoln: Vampire Hunter”. That novel imagined the 16th US president as the nemesis of the forces of the undead during the civil war.

Hachette is suing Grahame-Smith and his company Baby Gorilla for at least $500,000 – half of the advance it paid him six years ago, plus interest – saying that “by delivering a manuscript that varied so materially and substantially from that described in the agreement”, he is in breach of contract.